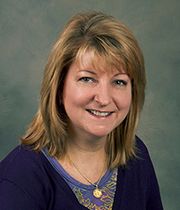 Suzanne is a graphic designer and artist who has been designing professionally since 1990. Originally educated at UW Stout and North Hennepin Community College, Suzanne graduated with an Associates degree in Commercial Art. Over the next 25 years, Suzanne built an impressive portfolio, including pieces that have earned several awards. Among these are the 2008 PrintImage Excellence Best Of Show award, 2012 Central Minnesota Printing Professionals Gallery of Superb Printing Gold Award, and most recently, Printing Impressions' 2014 National Gold Ink Award. This award was earned in the category of Digital Printing, Specialty, for a board game concept and design created with her fellow designer Peter Murray. Suzanne is originally from Stillwater and now resides in Plymouth, MN.